The architect who designed our house was a fairly rotund fellow: sturdy, stout and elliptical. Perhaps because he was forced to face his oblong softness in the mirror each morning, he may have developed an aversion to curves. And this may be the reasoning behind his blueprint full of geometrical angles so sharp and precise it would be possible to surgically slice yourself if you weren’t careful rounding a corner from the kitchen to the laundry room.

We fought tooth and nail, my husband and I as a team, attempting to insert an arch here or there, or a hollow that suggested pliability. In the end, we were successful in sandpapering a lot of the inside edges away, and felt it would be safe enough for folks to walk through the house without wearing Teflon clothing.

But the roof … stayed as was first drawn.

I should rephrase that. The roofs stayed.

Most houses I’ve lived in have had two slopes for cover: front and back. A little like topping off four walls with a Hallmark card tipped on its side. Nothing fancy, just functional. Usually, it kept the rain from sliding inside and down to the basement. Sometimes the rooftop capped a little extra space where field mice were grateful and Christmas ornaments slept patiently. It was traditional and comforting—nothing too out of the ordinary that would cause folks to drive by and shake their heads in wonder–because where I grew up, if you weren’t regular, you were likely prayed for in church.

But the house I live in right now would be worthy of an entire diocese on their knees 24/7 for a month’s worth of assistance. Every time I go outside to look at it, I wonder if the house’s crowning design is even structurally possible. There’s a very good chance much of it was done with the aid of mirrors. 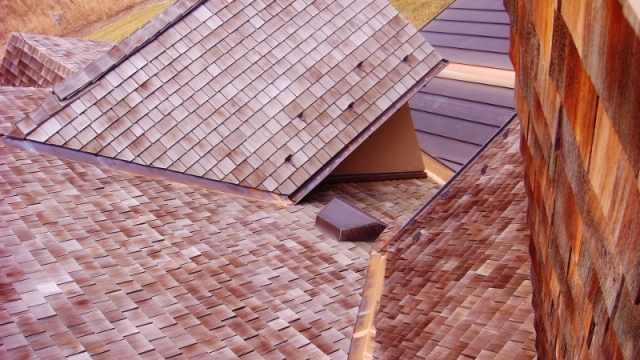 Rolling out the blueprints to familiarize ourselves with the architect’s vision, we’d find mathematical angles from algebraic equations that surely made Einstein pace. There were unfamiliar words like cross hip, trusses, soffits and underlayment sweat sheets. Some terms might have been written backward, just to keep us from asking about them.

Several of the planes would be done in copper, others would be shingled. Apparently, all of them would be connected. Regardless, the long tube containing the rolled two-dimensional version of our home’s pinnacle puzzle oftentimes remained in its safe scroll form.

Remarkable as the finished product is, and the mathematically improbable achievement aside, I tend not to think too much about the rooftops unless one of two things occurs.

1. My son traps a wayward radio controlled aircraft somewhere in the maze of cedar and ductile metal. Living where we do, this is not an uncommon thing. The weather is fickle here in the Blue Ridge Mountains, where precipitation is capricious and Mother Nature is determined to throw as many weathermen under the bus as possible with the intent to increase their incoming mounds of hate mail and angry tweets.

If it’s a matter of unruly dirigibles, we wait for a good, solid Nor’easter to blow through and bring the airship back to earth. There’s nothing anyone can do without a crane, a tightrope and a harness. If the roof is brought to my attention via the weather, then it’s usually due to the fact that I can’t get to sleep.

Pellets of sleet or the pinging of hail resonate with precise metallic tonality—a common occurrence for those with tinny plates above their heads. Soft spring rains can lull you to sleep, but winter’s transformative temperatures makes the sound akin to that of a full onslaught of air attack with BB guns.

The true test determining one’s degree of torpor is the ability to snooze through the assault of sliding snow and ice. Because of the many pitched roofs, all built at a dizzying array of levels, pancake sheets of solidified snow slide down a steeply pitched plane, before crashing to the next grade. Here, knowing its jarring noise roused you from your fragile slumber, the arctic blanket waits until you’ve resettled yourself and then it melds with the newly met wedge of snow. It now carries on its domino-effect late night charades—ever increasing the clamorous intensity until the miniature iceberg finds its last slide and thunders down to crash upon a groaning, snow-filled deck below. The clatter can catapult you from a dead sleep and have you diving for cover, firmly believing there’s an air raid above you.

Yes, I now know the difference between a ridge and a gable, the flashing and fascia, the dormers and drip edge, but it’s the rioting in the rafters that leaves me bleary-eyed and bushed.

Next house, I shall live in a cave.

14 thoughts on “Math; the cacophonous noise of numbers.”