For as far back as I can remember, Christmas Eve—not Christmas Day–was the most revered twenty-four hours in our house.

I was never sure if it was just our family who did this or if it was a world-wide experience. I spent little time thinking it over as I was much too busy growing limbs and forming consonant/vowel combinations to really pay attention. Then it was too late and it was simply taken for granted.

I could also never understand why no one in my elementary school got unduly excited over December 5th rolling around each year, and could not comprehend why this day was not discussed on the playground, at the lunchroom table and across the chalkboard.

Then I eventually figured it out.

Now before you all get your knickers in a twist over this statement, let me explain. I don’t mean, ‘We were Polish’ in the sense of the phrase where people poke fun at one ethnicity for lack of intelligence in comparison to theirs. I mean it in the sense that everyone else I went to school with was German, Scandinavian or Lutheran.

Okay, and to be honest, yes, the first sense of the phrase also applied, but that was strictly an explanation offered up by my science teacher who simply hated that in the three years time he taught me, he never got the hang of pronouncing my last name and blamed his chunky tongue on my ancestor’s abhorrence for brevity.

Regardless, even though I grew up in a community in Northern Wisconsin where multitudes of Poles had settled their weary bones, bought land and then found out seconds after the ink had dried on the bank loan that the summer season lasted about seven days on any generous year, none of them went to my school. And hardly anyone was Catholic except a handful of ‘on death’s door’ elderly folk. All the cool Catholic Polish kids lived in the next town over.

And if you look at all the adjectives in that sentence, you’ll realize just how closeted I really was from the rest of the world.

Basically, this all meant that none of my friends or classmates hung up their stockings on the eve of December 5th in order to celebrate Saint Nicholas Day, and none of them had their big family dinner, opened presents and went to midnight mass on Christmas Eve.

I remember the day in fourth grade when I brought in my long, stretched out knee sock, plum full of nuts, fruits, chocolates and Christmas sweets to compare what St. Nick brought me with what he brought my friends, only to be greeted with the look on those friends’ faces that, when lined up, collectively spelled out the word OUTCAST.

From then on, it was something I felt our family did clandestinely, like a shameful secret, and as if at any moment someone might pound on the door at night and shine a flashlight on the saggy, pendulous hose hanging close to the wood stove, rousing us out of our beds and demanding to see our holiday papers.

Christmas Eve was another matter though. Waking up that day was something that occurred because of smells rather than sounds. When I think of the meticulous preparations my mother launched into at the crack of dawn in order to create the evening’s spread, I can only liken them to the monumental effort it requires each year to coordinate the Macy’s Thanksgiving Day Parade. Or a full length reenactment of the American Civil War. Somewhere around the first of February she had to begin the entire cycle of rudimentary groundwork all over again.

While my mother labored in the kitchen, the rest of us scattered to all corners of the house, sealed ourselves behind closed doors and began the arduous but giddy process of wrapping our Christmas gifts to one another, only coming out to either peek beneath the lid of a pot or beg someone to part with their roll of Scotch tape.

Somewhere around sunset we were ordered to dress for dinner and then mass—something festive and church appropriate. Clothing that was too celebratory or battery operated was often shunned by our elders. Apparently, seeing a bright red glow bleed through your parka and hearing Rudolph the Red-nosed Reindeer accidentally spring on loudly from your novelty jewelry can mess with a few pacemakers.

Dinner was white. White tablecloth, white candles, white food–all except for that hidden almond in the rice pudding, which if discovered in your portion announced to the rest of the family that you’d be the next to wed. After a few years truly paying attention to this soothsaying recipe, and seeing that year after year none of my three siblings were married off or even promised to another family in exchange for a few animal skins to combat winter, I stopped believing. It’s a crushing blow when at the fragile age of nine you find you’ve wasted an entire year waiting for one of your classmates to get down on bended knee and there were no takers.

Following dinner—and a world record for speediest cleanup crews—we all sat down in the living room and exchanged gifts.

I didn’t realize this was weird until my own children boycotted the event in favor of doing it “the regular way like the rest of the world.”

But come to find out, there are a slew of others like us out there. I think at some point we were told we did the whole gift giving bit on Christmas Eve because we were imitating the three wise men and their generosity. For a long time I’d thought it was that we were so close to the North Pole we were basically the first stopover. 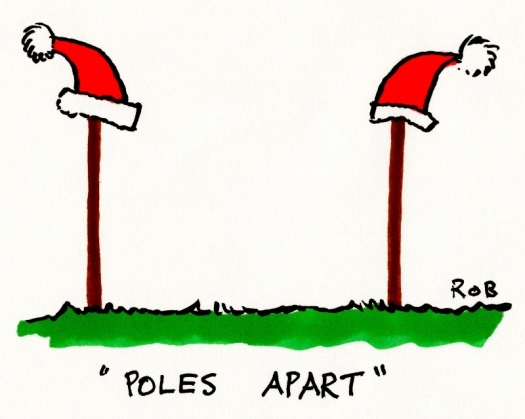 After all the ribbons and wrapping were cleared enough to make a path, we bundled up and headed out for the grand finale: candlelight midnight mass.

As a kid, I’d always wondered what it would feel like to show up like 99% of the congregation–shuffling in a few minutes before mass, locating a seat and then finding myself enveloped in the soft glow of all the flickering flames and the concert of glorious music. It never happened. Our family was the concert of glorious music, although I usually didn’t think it too terribly glorious at the time. My mother was the choir director and myself and my three siblings were the church’s orchestra–not to mention half her choir. We were also a blight on her backside as we did our best to unionize and complain about the conditions we were expected to play and sing in.

But that’s another story for next year.

Suffice it to say, the ride back home after the food, the gifts, the candlelight and music, on snow-filled streets with a starry black night, was a heavenly experience I could not wait to repeat.

Polish or peculiar, it was perfect.

PS As a tiny gift to my favorite Grinch whose heart needed boosting, I leave you with a goodnight lullaby. I wish you all peaceful, somnolent, silent nights. (And an extra holiday hug to my children for playing the violin, mixing and mastering the music.)

30 thoughts on “All alone on Christmas Eve …”