I couldn’t sleep last night. In my head, all I could think about was that tomorrow was Launch Day—the culminating event of a two week, end of high school senior project my eighteen-year old daughter was tackling. The title of the adventure was Project SkyHAB (for Sky High Altitude Balloon). But I referred to it fondly as One Teenager’s Dream to Make it Rain in Space.

In order to fully understand the impossibility of success for this operation, you must catch up. Read this. It’s part one. The rest of us will wait while you’re gone. Hurry up.

Alrighty then, now that we’re all on the same page, it will not come as a surprise to find out I was assigned to be Head of Mission Control. That meant I would need to be glued to the monitor attached to my computer with no distractions like food or water, and maybe only the occasional gulp of air for the entire four-hour flight. I would need loose fitting clothing and a slickly greased swivel chair. It’s not as glamorous as it sounds. There is a bucketload of stress attached to the job, and I’m guessing at some point, someone may consider making a film about it. 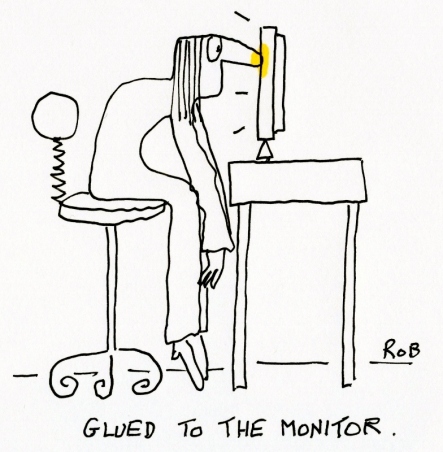 I heard my daughter leave for the launch site just before 5 am, and like most folks in charge of the less physical aspects of a job—particularly those in management—I went back to sleep for a couple of hours. She’d call if there was a snag. I was sure of it.

After a while, those of us who considered ourselves top brass rolled out of bed. The hound, the hellcat, and I all found some grub. One of us was supposed to purchase freeze dried astronaut food as a way of setting the mood and creating a scene, but didn’t. I glared at them both. This was going in the report.

We waited anxiously for the phone call that was to signal the start of the countdown, and bounced around from room to room keeping limber. We did laundry, washed some dishes, pulled a few weeds, and penned yet another lengthy epistle to Carl Sagan, who for some rude reason started ignoring my missives around 1996. I was hoping to Skype with him while the balloon was making its way spacebound.

Apparently, my personal Houston was not going to answer, so I’d have to go it solo. I wasn’t deterred. More donuts for me at the afterglow party once we’d achieved success.

Although I was told to hang tight for the T-minus 60 notification, my anxiety about the many hour delays compelled me to phone the launch site every 30 minutes for an update.

I heard explanations about faulty equipment, excuses that laid blame at the feet of a roll of duct tape, and a lot of foul language. It was a little like attending one of my daughter’s violin gigs.

Wanting to make sure I was totally up to date, I continually refreshed the website that broadcasted the GPS coordinates. It pinged the same longitude and latitude for hours on end. I decided I should be prepared with backups in case of an unforeseen local blackout and a complete loss of power, a massive equipment failure with my desktop, or a solar flare incident that wiped out the one satellite dedicated to me and Project SkyHAB for today.

I called my dad and a friend.

I told them science depended upon their willing participation and announced they would get credit in the report write up sent to NASA.

My dad bargained for a nap mid-afternoon.

I told him this would affect his performance evaluation in the report.

He told me that either he got the nap, or I could go fly a kite.

I reminded him that this was A BALLOON.

There was some terse language about a union, and a reminder that he knew people who worked at the local Pennysaver, so I finally gave in and agreed to the nap. Bad press is not gonna happen on my watch.

At precisely 12:43 pm—or something close to it—I received the much anticipated phone call. My head was in the fridge. I was cleaning chocolate milk off the shelves.

“Wait—what?? Where’s the countdown? There was supposed to be a countdown. And I needed to have my people on standby. How could you have already launched when I—”

“MOTHER! ARE YOU TRACKING THE COORDINATES? WHERE IS MY BALLOON?!!”

“Hold on a sec.” I raced to my super slickly greased wheelie chair and tried to get my computer to wake up from sleep mode. It was obviously over-tired from the taxing morning work of refreshing the GPS site and refused to be roused.

“MOTHER! WHERE IS MY BALLOON!”

The computer screen flared to life. The coordinates flashed in front of me. My heart seized up and stopped beating. “Huh … how bout that.”

“It appears your balloon is still at the launch site.”

I heard the phone drop and the distant voice of my daughter shouting, “Come back! Wait … come back, baby!”

You want to know what happened next? I’ll bet you do. Let me just say this: it involves a gun, a team of humiliated London policemen and Benedict Cumberbatch. No wait … that’s the contents of the next Sherlock episode I’m about to watch. Sorry.

Come back next week for the next installment of Hopefully Not a Waste in Space.