The last one always gets my attention. Yes, I know it’s not my name, but if I’m in a crowd and hear someone shout Mom, a thousand women turn around. This is the pattern of words/bird calls that my kids find necessary to stimulate my consciousness—my awareness of their presence (read demand for attention).

“Yes?” I raised my head to see my daughter standing beside my desk, her face a mixture of annoyance and impatience.

“Let’s go. Hurry up.” She held her iPhone in her hand and beckoned me. A man’s voice chattered through the speakers.

“Who’s on the phone?” I whispered.

She rolled her eyes. “NASA. We’re waitin’ on you now.”

I looked at my computer’s clock. 11:10 pm. Finally, I was awake for some big aerospace worthy event and not simply going to hear about it the next morning because it took place at 3:52 am and I chose sandman over spacemen.

I leapt from my chair and followed my daughter to the mudroom where we popped on our boots and jackets. Outside, the air nipped at any spots of exposed skin, so I did a little running in place to warm myself. I got shushed for bouncing too loudly and interfering with the crackling sound of our NASA Wallops men. They were ticking off boxes on a long checklist of things that could easily make a team of scientists fall to their knees and weep like children who lost a game of checkers if one of them didn’t get a ‘Thumbs up and go for it.’

My daughter ran in the house to shut off the kitchen lights, which gave me ten seconds of bouncing to myself. Kinetic energy converts to thermal energy, right? I was trying to think like a scientist. Then I heard her and the Wallops men float down the back porch steps in the dark.

I looked up into the inky black. The stars were crisply sharp tonight. It was as if NASA had done a last minute vacuuming of the sky, ridding it of any dusty bits that might interfere with seeing the rocket launch.

“What’s our rocket called?” I asked.

LADEE is Go for launch.

“Ladee?” I nearly shouted. “As in Bruichladdich? Wahoo!”

I was thrilled. They named the rocket after my favorite distillery in Scotland. And suddenly I was in desperate need of a dram to celebrate—if not just to warm up.

“I can’t believe they named the rocket after a whisky.” 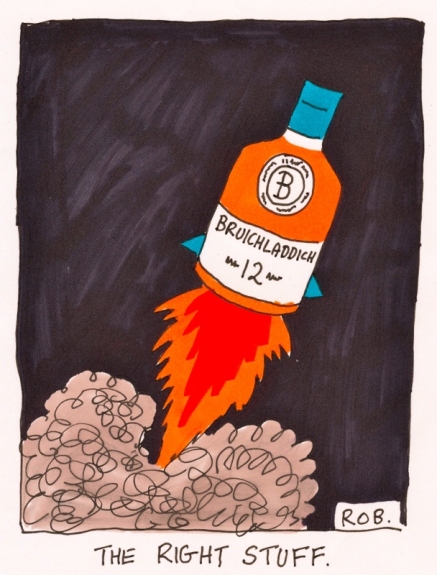 Even though it was too dark to see my daughter roll her eyes, I knew it accompanied the tsk sound that came from her mouth. “Mother … *sigh* … the rocket is not named for an alcoholic beverage. LADEE stands for ‘Lunar Atmosphere and Dust Environment Explorer.’ Now be quiet.”

“Where do we look?” I whispered.

She thrust a sharp finger eastward to the tree line. Even her fingers were shushing me.

I stood on tiptoe to see Wallops Flight Center. It was about one hundred miles away as the crow flies (or the rocket hurls). It turns out that I cannot see one hundred miles away. At that moment, Haggis, my hairy hound, hurled himself out of the house and—keenly aware of the heart-palpitating excitement and the need for speed—ran circles around us while barking.

I grabbed at his collar and pulled him nose to nose. “Be. Quiet.” I pointed at my daughter. “Can’t you hear that her god is speaking?”

A rocket was hopefully going to the moon. It was so exciting.

I held my breath. I really wanted to bounce.

2, 1, 0, ignition and liftoff of the Minotaur V with LADEE, pursuing a mission about moondust and the lunar atmosphere …

“Where is it?” I whispered, fingers crossed. I really wanted to see my rotgut rocket. My Bruichladdich LADEE. My moonshine heading to the moon.

What the heck is “nominal?” I don’t want nominal … I WANT VISUAL!

An orange ball rose from beyond the tree line, and I grabbed my daughter’s hand. “There it is! There it is!”

We watched the fire from this tiny toy rocket blaze through the sky, like a slow moving falling star going the wrong way. It was breathtaking.

Our NASA men kept us informed how all the flight instruments and power systems were performing, how the attitudes and flight paths were spot on, to watch for a separation, ignition and burnout because they were all part of the show. It was marvelous.

“How long will it take to get there?” I asked, thinking we might see pictures of its successful arrival online in the morning.

“Wha??” I balked at the thought of it. “But the moon is right there.” I pointed to the area I saw it hovering the night before. “It’s like … spitting distance. Are you sure?”

“When are they going to learn that unmanned missions are a waste of fuel? They should have just asked Tom Hanks to drive. He knows the way.”

My daughter turned to face me and sighed. “Goodnight, Lois.”

I blew a kiss at the tiny orange dot. “Good luck, laddie.”