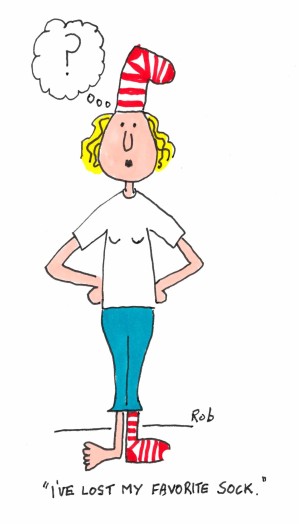 Well, maybe it’s more appropriate to say that I lost one of my two favorite socks, because, of course, socks come in pairs.

But this wreaks havoc with the wordsmithy part of my thought process—the one that wholly annoys almost all of my friends and family—the one where I cannot keep my lips clamped together when a person uses a word incorrectly.

Like the word priorities. There is no such word.

Priorities is not something that can be pluraled. (Nor is pluraled a real word but I’m not gonna get off track).

You can have ONE priority. The rest of all your important matters fall in line somewhere beneath that top notch point of concern.

I know. It’s a really picky piece of trifling tittle. But it matters to me. Almost as much as my favorite sock.

So … I take in a big breath this morning whilst looking around my closet and bedroom for where the damn thing might have scampered off to and remind myself—as it is January, and one of my New Year’s resolutions was to see things from “another’s” perspective this year in order to help myself understand half of my fellow Americans—to put on those lenses and look.

It might not be a perfect example of what I was going for when I uttered my pledge on December 31st, but I actually like the broad swath of application. I’m certain I will benefit from it in other areas of my life apart from the political.

Like when I look around my bedroom and spot a dying potted plant, a time-ravaged old rug, and an antiquated hamper.

“These things have got to go,” I announced to the curtains, who were doing their utmost to appear as unshabby as possible. “Every time I leave this room, morning daylight reminds me that the Salvation Army is waiting for a truckload of items from me.” Daylight brings on crisp objectivity.

And then I swear I heard the curtains snicker, “Try the dump, cuz even the Salvation Army has standards.”

I gave the curtains a menacing glare, told them to stop putting on airs, and left.

Because only half of my feet needed to find themselves dispirited today.

The odd sock happened to be that of my son’s, and in keeping with my theme of stepping into someone else’s shoes, I found it utterly befitting of my 2017 goals.

Today, I was going to see things from someone else’s perch.

Everyone I interacted with today got the same question: Why did you do that? (Only without the snarky-like overtones this sentence could easily convey if only reading.)

Like the small consignment shop I was sizing up for my eventual spring cleaning offerings. I’d pointed to a Trump poster up on the wall behind the owner. He pointed to a wall behind me, where a series of antique firearms were on display. “Cuz guns,” he shrugged.

I thought about how different the world felt from when I was a kid growing up in Wisconsin, where nearly every one I knew owned at least one rifle and brought leftovers from the reason they had one in the first place to any BBQ where everybody was supposed to contribute.

I asked the question to a Croatian woman who was cutting my hair and describing her life as a refugee when she told me that many of her fellow countrymen-now-American friends had voted for Donald Trump. Why did they do that? (This one was said with a big dollop of surprise on my face, but still no snark.)

“Because,” the hairdresser said, “they saw the Clinton name as a reminder of horrific times in our country and they were choosing the lesser of two evils—although,” she continued, raising a sharp pair of scissors into the air, “I had to remind them that Mr. Trump seemed oddly familiar to our own past president, Slobodan Milošević, who had been arrested on suspicion of corruption, abuse of power, and embezzlement, and had fraudulently voted himself back into office for his second term.” 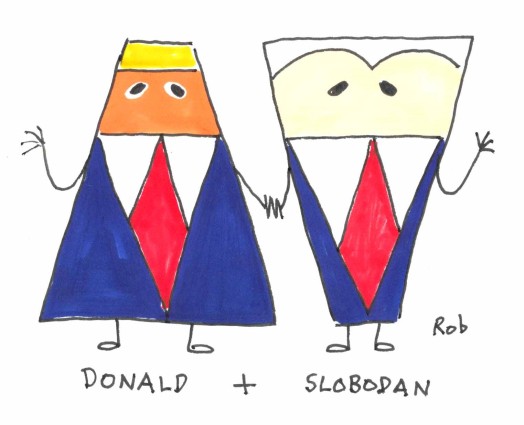 And finally, I’d asked the question to a psychologist friend of mine after I’d discovered that he, a lifelong Democrat, at the last minute switched his presidential vote. Why did YOU do that? (This time it was dripping with snark.)

He took in a big lungful of air and said, “So that I could better study narcissism. Purely for scientific research of grand magnitude.”

Then he raised a finger and said, “Don’t forget, good things can come about from this presidency too. Want to an increase NASA’s budget? Tell Trump the European Space Agency thinks they’ve got the First Foot on Mars position nailed. Want climate change to get some attention? Tell him China might be pulling into the lead problem solving position globally and are about to initiate geoengineering.”

I raised an eyebrow at him.

Okay, I thought after this long day of listening and not judging. I’m inching forward. Making a little movement. Increasing the scope of my perspective.

I decided to do something I’d not done in a long time and stretched out on the ancient, grizzled old rug. In no time flat I determined that from every angle and through any optic, this carpet still needed to go.

Then I pulled my feet up close to yank off today’s mismated socks. I tossed them toward the hamper and caught sight of the sock that had gone AWOL this morning.

Yup. Proof that seeing things from another perspective was going to serve me well this year.

I looked up at the curtains and told them I probably deserved a little praise for my advancement with my New Year’s resolutions thus far, but they responded with a Tell it to the hand kind of attitude.

It reminded me of my kids.

Maybe I could tell both of them so I’d get a pat on the back and a round of applause.

But then I thought of how they’d likely say they would have wished that my resolution was to back the hell off being such a grammar tyrant.

Don’t forget to check out what we’re cookin’ in the Scullery and what we all talked about down in the pub. Plus, you can see more of Robin Gott‘s humor (NOW FOR HIRE- so do go check out his gallery!)–all from the only pen carved from a human funny bone.