Once upon a time I met a guy.

Once upon a time I didn’t meet a guy, but I got to know a guy because we started working together.

Uh, okay, not even all of that is true either. We never actually started working together, we actually worked apart, but our efforts came together for just over four years.

I absolutely love the look on people’s faces when I tell them that my blogging partner of over fifteen hundred days is someone I’ve never actually met. It’s such a great story.

But even great stories—no matter how epically enthralling they are—will come to the last line of their tale with bold letters that say: THE END.

That part usually feels like you’ve been impaled by an errant satellite antenna and now have to wrestle it out of your flesh on your own with nothing but nail clippers.

Robin Gott and I had a couple of things in common:

But … we had one thing we did not share in common:

I saw them as broad-shouldered, well-muscled, claymore-handling kilted men who eyed me with a savage come hither look.

And Robin saw them as knock-kneed, prickly-legged, bagpipe-wheezing kilted geezers who couldn’t look anyone straight on because they were also cross-eyed from too much bagpipe wheezing.

His version was a helluva lot funnier than mine so I stopped writing about them. One does not want funny in one’s delusional, sigh-inducing afternoon daydreams.

I cannot begin to convey the number of reactions Robin’s cartoons have produced—it’s usually the first thing anyone brings up when speaking to me about the blog. More often than not, that comment is snorted, or chortled, or sniggered out by an individual retelling the tale of being in a public place while reading the post and then making some embarrassing sound of amusement that turned heads and raised brows. Coffee shop lines, grocery checkouts, and a couple of bathroom stalls. I’ve heard it all.

My kids had their own take on Robin’s work. Oftentimes my daughter would grumble as to the awkward teenage shape her blog version body projected, and my son would beg me to stop writing about him, as surely some teacher at school the next day after the post was published would brandish their smartphone, showing him one of Robin’s colored pencil drawn sketches of him and warn, “You’d better never do this in my class.”

I soon came to realize that Robin’s depictions of myself were wholly accurate: frizzed, limp, or muddled hair, ungainly limbs, mismatched clothes, and always an expression that conveyed anarchic chaos.

Usually, they were also more flattering than the truth.

And speaking of truth we circle back round to the facts. And the sad fact of the matter is that there are only so many hours to a day and Robin’s are jam-packed full of a burgeoning family life, day job, and acting career.

Sometimes you have to whittle away the fat from the bone—cuz, you know, sleep is a thing.

And I get it. When we first joined forces, we were pumping out four or five posts a month. Solidly. For more than a couple of years. Then a few people entered my life—an agent, some editors, and a dastardly heavy breathing brute of a thing called a deadline.

Once a month posts made everyone breathe easier. Except readers. And I got it. And by ‘got it’ I mean complaints. More people wrote in to express their dissatisfaction with the new arrangement. People NEEDED their Sunday shot of Gott—and oh, yeah, the writing wasn’t horrible either.

I advised most folks to recycle old posts. Most folks advised me to go take a long walk off a short pier.

But we must all come together and wish Robin farewell and good luck. The artistic world will continue to benefit from his influence and presence—whether he’s producing a play or appearing on film. And his doodles will live on. They are on my walls, in my text, and within my heart.

I have heard from so many people about the joy Robin’s sketches have brought them, and I know everyone will be saddened to find them absent.

One day, a long time from now, my grandchildren will likely discover as they tour through one of the halls in the Smithsonian, a jar containing a brain submerged in formaldehyde.

“What’s that?” they’ll bend down and shout into my Miracle Ear, seeing me chuckle with self-congratulations about a long ago prediction.

“That,” I’ll croak out, “is science’s failed attempt to understand the workings behind the waggish and whimsical wit of a man who saw the world through an enviable pair of glasses.”

I will pause and smile and remember.

“I was lucky to know him, but I never met him.” 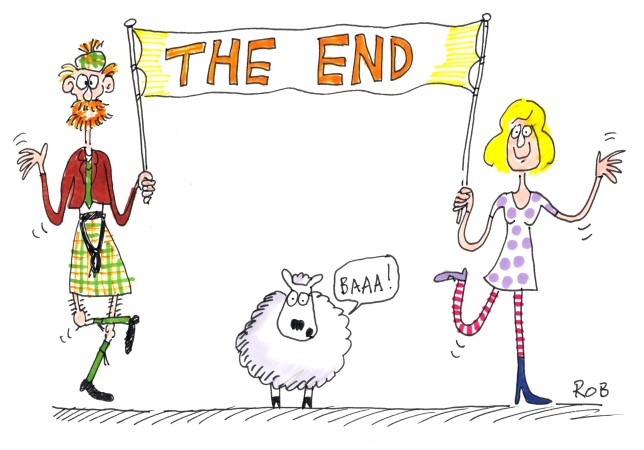 Don’t forget to check out what we’re cookin’ in the Scullery and what we all talked about down in the pub. Plus, you can see more of Robin Gott‘s humor (NOW FOR HIRE- so do go check out his gallery!)–all from the only pen carved from a human funny bone.