I’m having one of those days.

Everybody has them. Everyone is familiar with them. Nobody likes them. And we all nearly collapse with gratitude at the end of them.

I call them: Good For Nothin’ Days.

And even: FOR THE LOVE OF GOD, DOES ANYONE STILL MAKE CALGON?! Days.

I am having one of the last category days today. And I would like to get off the bus at the next stop and call an end to the day in general. Go no further on this ride.

The problem with today, and my list, is that nothing is getting crossed off. And the anxiety of having a day without the satisfaction of putting a line through tasks is much like having a warm heart to heart with an innocent, furry little lab mouse and telling him that today he will not be receiving his ever-available, always-flowing drip tube of liquid cocaine, and that he should just try to shake off the upset he’ll likely begin to feel at some point.

I am in total sync with the bewhiskered wretch. His tears are my tears. We pace the same cage. We are tormented by the same misery. 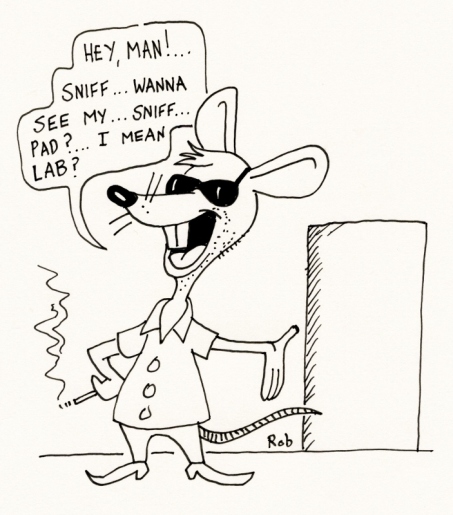 It’s not like I am making no effort to accomplish things today, but rather I am dependent upon other people, and although I have what feels like a bottomless pit of enthusiasm to spur on the lackluster drive of others, I cannot throw two or three or a half a dozen folks onto a sled and drag them up to the top of the hill to plant our collective flags.

One reason is because a snowplow is blocking the way.

Yes, I know it’s the end of March for you, but for me it’s smack dab in the middle of February. See? Time travel does work. Or rather, that’s how an editorial calendar works.

Part of the beauty of living where I do is that it’s remote.

Part of the bane of my existence, living where I do, is that it’s remote.

I prefer NOT to have interaction with most human beings because they interfere with my ability to work. But on the flipside, when I do need assistance, I can hear folks on the other end of the line all drawing straws to see who’s the unfortunate sod who will be assigned my work request order.

Usually I hear something like, “Uhhh … yeah, you should expect to see Jimmy—”

I’m not surprised. Or offended. I get it. It takes forever to get here, and the getting here part is usually rife with treacherous debacles waiting ‘round every bend—and by every bend I’m talking about the driveway. The first thing out of everyone’s mouth is always, “Seriously?” followed closely by a “ooohWEE!”, or a deleted expletive, depending upon what part of the county they were coming from.

My answer to the seriously? question was to have a 55 mph sign installed at the most dangerous and impossible part of the drive. I figured this was a surefire way of eliminating any person with an IQ that fell below that of leaf mulch from making it to the top and thus to my doorbell.

The ditches on either side of my driveway have housed more automobiles than many car dealerships around here. Tow trucks almost always call for backup tow trucks, which result in calls back to the shop for specialized winches, axles, and ratchet straps, and when they realize they’re both in a bind, someone usually phones David Copperfield to get a quote on levitation.

If there’s even a whisper of frozen precipitation in the forecast for my local area, it’s generally guaranteed that all packaged mail delivery folks will leave a note on the gate at the bottom of the hill saying they dropped by, three days running, and go figure, no one was ever home. Anyone scheduled to head up here for maintenance suddenly has a “family emergency” and will have to reschedule. For some time in June.

For some time in June.

Snowplow drivers, on the other hand, are a fearless breed. Those that do not get hired by the county are the ones that generally have been weeded out because although they may lack fear, they usually also lack sound judgment. Most drivers will recognize the difference between pushing a load of snow, and say, taking down a small grove of fruit trees, or clearing the road of pesky fire hydrants and mailboxes.  The ones who feel it’s pretty much samey samey, hang up a shingle come wintertime and are up for private hire.

And luckier me, I’m going to head down the mountain’s deadly driveway for the third time today to find out if this fearless fellow would finally like for me to call for backup to get him back on the road and out of the grove of solid trees he mistakenly took for the route we normally use with our cars.

“Yeah,” he says, kicking a tire that just can’t seem to get a purchase on the air it’s spinning in. “I’ve tried and tried,” he waves his cell phone at me, “but I can’t get no service up here on this mountain.”

Tell me about it.