Midway between the winter solstice and the spring equinox up here in the Northern hemisphere, folks start to get squirrelly.

We’ve made it through the big eating festivals of Thanksgiving and Christmas, gushed forth an armload of inebriated promises to ourselves at New Year’s—swearing ‘change was on its way,’—and then we slogged through the gloomy gray of January, bedamning those drunken oaths.

When February hits, we are tired, we are bloated, and we are desperate.

So we flip the calendar to a new page and employ the soothsaying prowess of a rodent. We gather round the critter’s hovel and cast out our urgent pleas.

Make these dreary days brighter for us, oh woodchuck!

And then we hold our pudgy warlocks high into the air and ask them to divine the future for us as all sane people of advanced cultures are doing.

According to most of my reliable internet search engine sources and Frau Heidlehaufen on the north side of the large hill I live atop, both have stated that all groundhogs rise from their winter slumber on February 2nd at daybreak. Frau Heidlehaufen might have actually said prune cake or headache, but as she is a 92 year-old woman with only three teeth, most of what she says is easily mistaken for a long buried form of Greenlandic Norse.

What happens then is thus:

If our precious badger-like beast spots his shadow casting a long form from the front doorstep of his burrow, he yawns, waves drowsily at the gathered crowd and heads back below to hunker down for another six weeks of snoozing until spring will finally arrive. 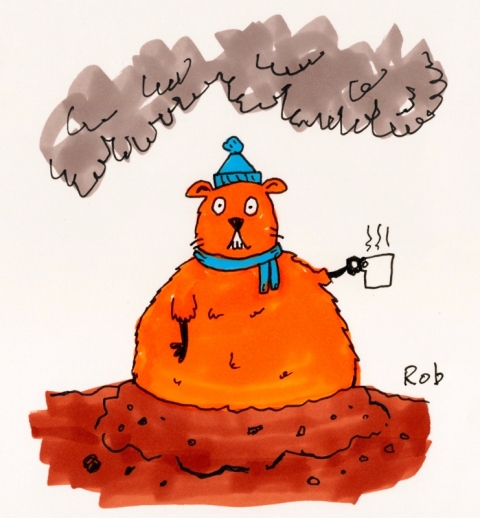 But if our meteorological marmot does not see his shadow, he quickly checks his stocks on the NASDAQ, scampers into his bunker to put on a pot of coffee, and starts sifting through seed packets for the early arrival of spring—which should show up in about six weeks.

How did we wonky Americans come up with this little piece of mid-winter amusement? Clearly, it came about at a time when the Internet had yet to enter stage left, Instagram wasn’t even in the stages of Let me show you the pictures from my family’s trip to Disney World, and George R.R. Martin was likely giving himself permission to go to the bathroom in between writing his enthralling epic novels for a demanding and impatient readership.

We obviously needed SOMETHING to keep our spirits up.

And I think most of us have realized that if we can’t find a ferret to shove down our trousers in a round of raucous pub games, then any animal from the group of large ground squirrels will do.

Of course, there’s also the historical footnote stating that this custom was brought to our country via the Germanic tradition of Candlemas Day where folks would bring their year’s supply of candles into church to get blessed from whomever was behind the altar that day.

Yeah, I’m not really seeing the connection either, but this fact was brought to you via some old school traditionally published encyclopedia that I was thumbing through and not my more reliable source of some dude’s blog post advertising his small West Virginian farm and the heart healthy benefits of varmint meat. You decide.

There are plenty of American cities that have claimed their prickly pet as the real deal, but read any poll administered by the good people of a small town in Pennsylvania and you will soon see that Punxsutawney Phil, Seer of Seers, Sage of Sages, Prognosticator of Prognosticators, and Weather Prophet Extraordinary is the groundhog upon which all other groundhogs measure their self worth.

If there is one thing we must collectively agree upon though, despite the protestations from the National Oceanic and Atmospheric Administration stating that the groundhog possesses “no predictive skills,” it is the fact that these guys are amorous little rascals.

According to modern ethologists, who believe the study of animal behavior is more reliable using the scientific method vs. folklore, these chubby chucks are not actually stirring from slumber to check on the weather, but whether Shirley, or Sheila, or even Shondelle—a few burrows over—is up for a quick cuddle. 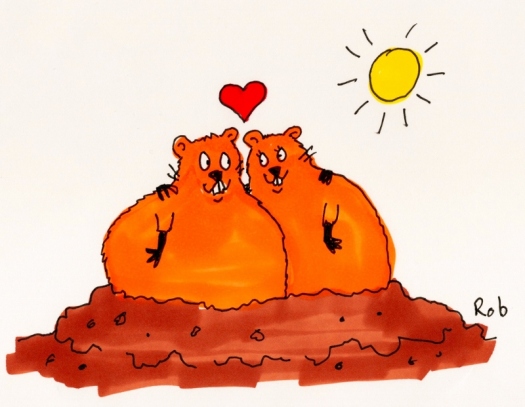 It turns out that our furry friends pretty much feel the same way we do come the beginning of February: they are tired, they are bloated, and they are desperate. So they gather round another critter’s hovel and cast out their urgent pleas.

The answer is usually yes, as thawing somebody else’s icicle toes turns out to be a pretty heartwarming gesture. Apparently we’ve been wrong about these creatures from the beginning. They are not oracles with a forecast from a Doppler radar wormhole, they are simply starry-eyed romantics. They are motivated by nothing more than answering the quest for comfort. Just like you and me.

In the grand scheme of things, we’re pretty much all groundhogs at heart.