I’m a sucker for tradition.

Anything that has a ceremony, a ritual or a rite of passage—I’m filled with goose bumps, my breath comes short and I’m often searching for some celestial choir of angels to swing down from the rafters to make it a massive biblical event. Maybe one worthy enough to throw a small epilogue onto the end of the New Testament. We can call it, ‘The Newest New Testament.’

I’m not saying it’ll ever happen, and maybe all those early years of repeated genuflecting and inhaling terpenic-scented incense has left me with a woozy, slap happy wit—one that expects seas to part, meals to multiply and the dead to rise.

I can appreciate lessons of morality, plus the necessary insight one must cultivate in order to apply time-tested and multi-authored philosophy. This education is critical. Much of it can be gleaned from the passages of great religious books. But it can be incredibly soul crushing to some—in particular to small children whose teachers are sharp tongued women covered nearly head to toe in billowing capes of all black, and whose weapons are heavy yard sticks that can reach up and ring the pearly gates’ doorbell to report all poor behavior. 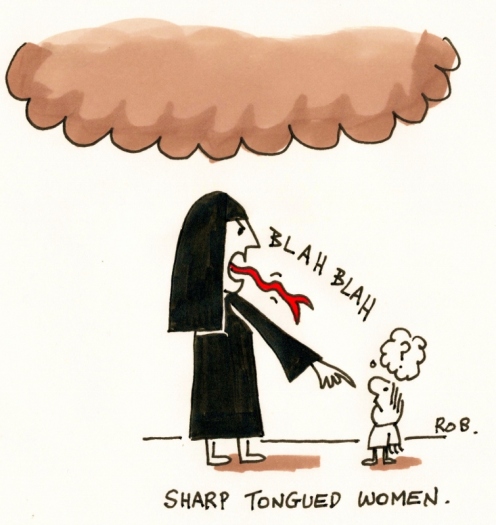 Soon, I learned that I preferred my religious lessons to come from Monty Python’s films and Flying Circus. A giant cartoon foot coming from the clouds to squish out all the evil below it was a mental picture I preferred to hang on to when needing moral guidelines. Hellish devils with demonic eyes—not so much. Therefore, I attribute my current gooey nature to a mix of my befuddling past and will leave it at that.

Last week, I participated in a century long practice at my daughter’s school that has packed a yearly ‘one-two punch’ of heart-swelling sentiment whenever I attended. And for each one of those years, it has been the highlight of the academic season.

It is called Convocation.

And apart from the general act of convoking, the assembled mass is treated to a few dynamic moments all squished in to about 75 minutes worth of pomp and ceremony. It is the official opening commemoration of the school year, honoring the graduating class and their parents.

Firstly, the show starts off with a big bang—or a giant wheeze, if we want to get technical.

A bagpiper slowly ambles the huge perimeter of our giant gymnasium, blasting out a few golden oldies from the 1700’s.

This guy is costumed head to toe. He looks like an authentic Scotsman pulled straight off the battlefield of Culloden—minus the spray of blood. But for some, you’d think there was blood pouring from their ears by the looks on their faces.

Yes, it may be true that he’s probably as old as the songs he’s pumping out of his ancient carpet bag, and that every year folks place bets as to whether or not he’s going to drop mid gasp before he reaches the podium, but for me, no matter how poorly his pipes are tuned and despite the fact that it’s difficult to tell if the bagpiper has started playing or the crowd spotted him standing at the door and groaned collectively, he is the most sublime part of the show.

And from my perspective it all goes downhill from there—they’ve opened with their strongest act. 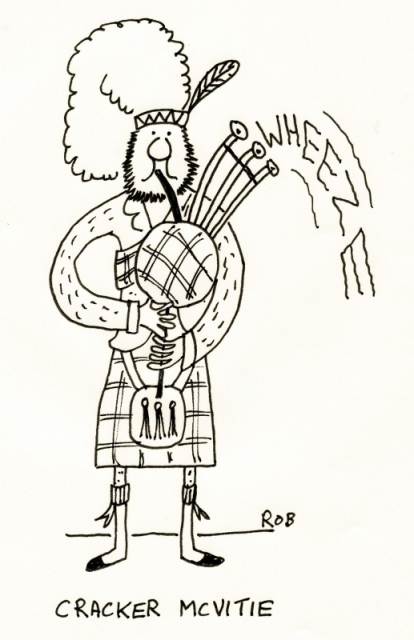 The large cast of faculty—decked out in their graduation gowns and scarves—follow behind the piper, and parents and their stripling scholars bring up the rear. It is a parade of high-powered proportions. Authoritarian, illustrious, and grand. It’s also surprising that the ceremony can be held indoors, as the massive amount of computing power represented in the collective brain tissue present requires an inordinate amount of oxygen to keep it running. And we all know the piper has used up more than his fair share, so traveling behind him can be dicey.

Thereafter, we hear the requisite speeches from lofty politicians, returning alumni, the headmaster and the senior class president. Some years have been livelier than others. There is always the hope that whoever the visiting dignitary is will spew out a soliloquy worthy of some fire and brimstone special effects, but more often than not it is polite and encouraging, a speech equivalent to raising a small colored pennant with the words, Go team, Go! printed on it.

Halfway through the show (ahem, ceremony), the choir tentatively releases a few uncertain chords, and the school orchestra makes a gallant attempt at playing a splashy piece. There appears to be an enthusiastic display of shiny cymbal work, which is likely a purposeful decision, as many of the musicians are still struggling with remembering how to tune their instruments this early in the year.

Nonetheless, it’s a marvelous display that chokes up even the stodgiest at heart. For me, it all contributes to the growing fervor and the knowledge that, for my daughter, it is the last time she can participate in the pageantry and fanfare.

It is a day to cherish, a memory to cement, and it leaves me with an overwhelming desire to scour the local papers for a bagpipe instructor.

Surely there’ll be an opening for work in that field fairly soon. But then again, the dead may rise.

15 thoughts on “A Rite of Passage with a Perishing Piper”