Nature is full of surprises.

There’s the kind of surprise where you trip over a small nest that the wind inadvertently tossed out of a tree and discover it’s full of bluebird eggs. Love that one.

You might also experience the wonderment of learning that the deer and bunnies have a finely tuned vegetable patch timer that coincides with your garden’s peak completion—except they receive a notice about three hours before you. This is another type of surprise. Not nearly as keen on this one.

And one can’t forget the bombshell astonishment of the occasional black bear chase surprise. Not looking forward to repeating this one at all.

Nature especially loves that last one as I’m pretty sure I’ve heard her laughing her tuchus off while it was happening.

And I took it personally. So Nature and I are not really on speaking terms this week.

I’m holding an especially big grudge as a couple of weeks ago I saved one of her tiny bunnies from drowning in my pool and I’ve spent weeks on my hands and knees freeing the garden of the less tasty varieties of weeds so that the hordes of woodland creatures can easily spot the juicy blueberries, the antioxidant jam-packed tomatoes and the clusters of sweet as sugar lettuce leaves.

Not a thank you in sight.

But the day I took on the ‘mother of all grudges’ against Mother Nature unfolded on one of those swampy, thick as molasses afternoons Virginia forgets to advertise in the brochures that highlight the hay bale dotted farms, the winding mountain roads and more Civil War re-enactors than were probably involved within the original cast.

The hound always takes the lead on our daily hike as if he’s the canine equivalent of Ernest Shackleton and we’re racing to plant the flag at the bottom of the mountain. I’m guessing he picked up this idea from the many times he’s seen me bring letters down to the mailbox and raise the little red standard to shout out to ol’ Earl that he needs to stop and pick up some post. 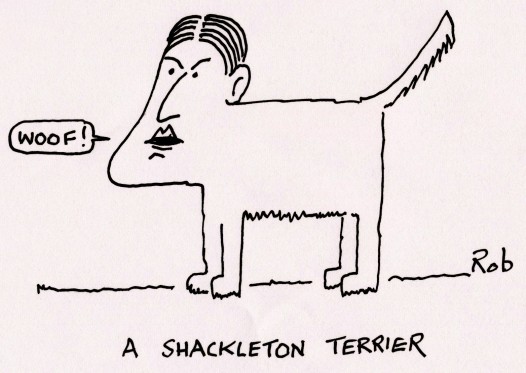 I can see how it could be confusing.

But this time we hadn’t made it quite halfway down the hill when I see the dog running back up with a giant smile on his face, as happy as if he’d just discovered that his vet wrote a prescription for one jar of peanut butter per day for optimal health.

Yeah, that would be a total daymaker for him.

I followed him down the hill to see what all the fuss was about, and turning the corner we come upon—not the vet with his prescription pad in hand—but rather the largest bear I’ve come to see up on this little mountain of mine.

This is soooo not a good feeling when you know at that very moment you really should be on your game.

I scrambled through the cluttered files in my head. What to do, what to do, where the hell did we put that bit of info!

I wondered, do I run? Play dead? Run? Climb? Run? Charge? Ha! Charge. What an idiot for thinking ‘charge.’

RUN was definitely flashing up on the screen more than anything else, but I remembered something from my several years ago ‘what happens when you spot a cougar?’ training I had to do after I’d spotted a cougar on the mountain.

I did. I raised my arms above my head. The bear—maybe 50 feet in front of me was not impressed. He started walking toward me.

Seriously? Like I’m in charge of the bear? I did. I roared and waved my hands around above my head.

It did not have the desired effect.

That whole RUN! piece of advice leapt in front of everything else again, but so did the tiny piece of info that I recall reading from my brother’s boy scout handbook that said, You can’t outrun a bear.

But another thought kept screaming, CAN’T WE EVEN TRY??! 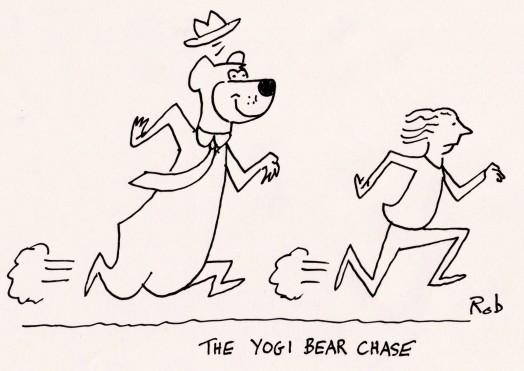 I scrambled for a big stick on the ground.

He stopped and then made a wide circle around me. It was a bluff. Or maybe my stick was super impressive as far as weaponry is concerned.

I started walking away sideways, watching this big hunk of fur and claws and teeth keep pace with me.

My next thoughts were: Shoot, I did not finish my new last will and testament. And Damn, there are dishes in the sink and I forgot to make my bed this morning. Whoever comes to search for me will rethink my cleanliness benchmark. And lastly, I wonder if he will kill me and THEN eat me, or if he’ll start the eating part first. But hey, on the bright side, I will now finally see a turkey vulture up close.

It’s amazing and alarming to discover what your “last thoughts” truly are. I’m hoping I can rectify mine for my next near death encounter—should there be one.

Thankfully, the big bully lost interest and wombled the other way. It may be due to the fact that I reeked of DEET, and that is a marinade he found unpalatable.

Or it could be the fact that he bumped into a tree and inadvertently knocked over a bird’s nest and discovered it was full of bluebird eggs.