Well, I suppose it depends upon the kind of surprise. The Hey, you just won a year’s worth of dental hygiene! could be nice. A Mom, I passed physics! is pretty worthy. And Your book is going to be made into a movie! is a phone call I am so hoping will come one day.

The surprises many of us would rather not face down the pike are:

Or: What? You’re pregnant with triplets … again?

And of course: Hey, honey. My mother is moving in with us. Surprise!

Obviously these bombshell examples aren’t things we regularly have to get used to, but I’d like to make you aware of a few eye-popping truths that have become the new standard for normal around our planet.

1.) 43 million children under 5 are overweight or obese.

3.) The number one source of calories in the United States is from high fructose corn syrup.

4.)  43% of pilots admit to falling asleep during their flight. 33% of them wake to find that their co-pilot is out cold as well.

Yes, folks, the numbers are rising, just like those of the Earth’s temperature and most countries’ national debt. The stats I’m focusing on today are strictly numbers 1-3. Number 4 was thrown in simply for your armchair amusement, and your in-flight horror.

The bad news is that today’s generation of children will be the first to have a shorter lifespan that that of their parents.

The good news is that it doesn’t have to be this way.

The great news is that it’s super easy to flip these numbers because the only thing standing in the way of our children’s health is our children.

Oh, and the media.

Oops, and their friends.

Yeah … and the school cafeterias.

Alright, maybe we ought to back up to the statement that simply reveals the good news bit, because once we realize what it is we’re up against, the odds for growing healthy human beings seems nearly insurmountable.

How do one or two parents launch an effective campaign for their children’s health that can stand up to billions of dollars in marketing, peer pressure and the common sense of legislation that states lunchroom pizza can be considered a vegetable because it has tomato sauce on it?

The food industry spends over two billion dollars a year with advertisements that target kids alone. TWO BILLION WITH A “B!”

But unlike air and water and social media, those products of the food industry are nearly nutrition-less and only benefit drug companies who develop insulin related medications, Weight Watchers, and clothing manufacturers who charge by the square inch.

For those of you who are in command of stocking the fridge, I’m sure you’re familiar with the rule of thumb that one should never go grocery shopping while hungry. For those of you with children, there’s the extra add-on that one should never go grocery shopping with anyone who has learned to point and speak. With pointing and speaking comes nagging, and marketers have done studies to determine that it takes an average of “nine nags” for the typical child to convince a parent to give in and give over. Nine. 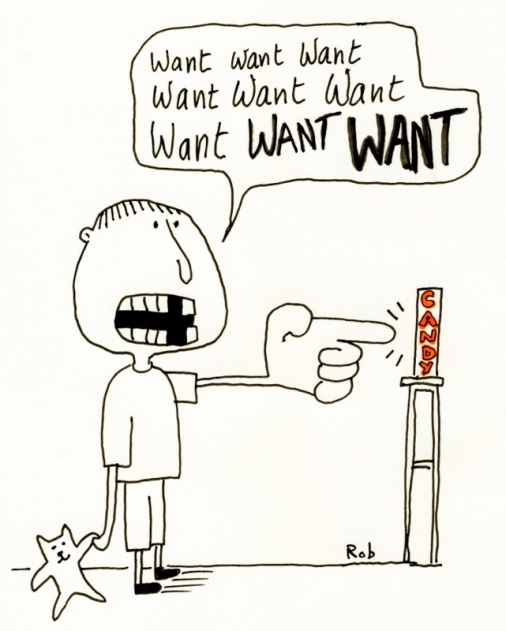 That’s one above parental patience—where one disciplines while maintaining a princess Disney voice—and one below that combustible threshold I learned about in my daughter’s science project. Kaboom.

So while my kids were growing up, I found it was safer if they stayed home. A win win for all of us. They didn’t see the blazing, tantalizing come-hither advertisements placed directly at their eyeball level, and I didn’t get escorted out of the supermarket for hijacking the public address system, begging that anyone with a Xanax for me and duct tape for my kids would please come to aisle five for some serious cleanup.

But this only lasts so long, because sooner than you know, the cat is out of the bag and your kids are off to school. This is where all the forces of good are overwhelmed by evil and your children declare you to be Satan.

They come home one day, slam the front door while tossing their tiny book bags to the floor and shout:

“Nobody else plants their own food!”

“None of the other kids have gone on monthly fieldtrips to local farms in order to watch dinner be chosen, slaughtered and butchered!”

“And not a one of them were told that they must study the stupid French technique of making duck confit because that helps with riding a bike!”

Oh? I say. And did you also crush their belief in all things sacred by telling them that chicken actually has bones?

I have grown immune to their evil glares, but I refuse to ignore what’s happening to our kids and their declining health. It can be easy to shrug and wave the white flag of surrender, but I for one look awful in white and refuse to do so. I will continue to fight this worthy battle. And I’m doing it with my words.

Words are pretty powerful things. They move us, convince us, enrage us, and enlighten us. I’ve become so determined to help in the growing campaign for kids’ health that I wrote a book to tackle the subject, by tickling kids’ funny bones. I’m not sure if it will have an impact, but my fingers are crossed it will touch at least one or two folks. And if it helps one or two, that might have a ripple effect elsewhere.

But just to be clear, no one needs a book to make an impact. You just need to know you have a vote.

Folks are often surprised to remember their voice actually counts. The simplest way to do that is by deciding where your dollars, pounds and shekels will go.

And I bet the food industry will be pretty surprised to find a growing chunk of folks are fed up with the baloney they’re trying to feed our families.

It’s hard to initiate change—especially when you feel it’s a case of Muhammad and the mountain. But as I always say, if you’re going to eat an elephant, you’ve got to take it one bite at a time. And bringing better health to our kids is a battle I’d bet most of us are willing to fight.

That should come as no surprise.

58 thoughts on “Diabesities: Our Young Brood’s Battle with the Bulge.”

Error: Twitter did not respond. Please wait a few minutes and refresh this page.