And here we are, folks. A peek into DEAR OPL–a project of mine that began probably around the same time ancient Babylonian astronomers were first discovering some of our solar system’s inner planets.

You’ll see the synopsis, the first chapter, and the first press reviews by Kirkus.

There is a sinkhole deep inside thirteen-year-old Opl Oppenheimer, and for two years she’s plugged the leak with a wad of junk food. But a hole from heartbreak is tricky. And anyone who’s experienced eighth-grade science frog dissection knows a heart can’t be repaired by a bubblegum band-aid. Worse still, overweight Opl now faces diabetes and must swallow the bitter news that sugar is the problem and not the solution to filling the empty space her dad’s presence used to occupy. Even the school’s galling version of celebrity chef Alfie Adam’s Meal Madness is turning Opl’s self-prescribed soothing syrups into miserable medicine. Mock meat and healthy colon slogans plague the lunchroom walls, encouraging change. But Opl can’t see the value of changing her whole life to save her future since it’s the past she wants to retrieve.

Opl identifies a scapegoat for her growing burdens and rallies an internet attack on Alfie Adam. The plan backfires, threatening the success of her mom’s bookstore, the loss of her best friendship and an international lawsuit. To win back her friend, Opl is forced to pledge allegiance to her arch enemy–the health-crazed chef, but in doing so realizes that, just like kimchi, festering problems, if handled correctly, can produce something a whole community can savor.

The dark enveloped me, squishing my lungs. Like the engulfing bear hug you get from an uncle who’s built like a lumberjack. But this black was so tarry and thick, it made me feel as if I were breathing syrup and forced my heart to thud in my chest. I blinked again and again, and squinted hard, hoping something—anything— would come into focus. I wanted to sprint for my bed, to hide beneath my quilt, where nothing but fuzzy warmth and an old licorice stick are allowed. But I needed this. I couldn’t leave because I had to get rid of the awful ache that poked at my sleep. If I fed it, like a lion at the zoo, it would circle and grow quiet. Sometimes.

Even though I wasn’t supposed to.

My hands fluttered in front of me, like a couple of blind butterflies. They bumped against a pointed edge. I jerked back, thinking I’d been bit, but I took a breath and crept forward until I touched it once more. I traced my skittish fingers along its form until I felt certain the thing wouldn’t strike at me with sharpened fangs and light up with red demonic eyes. It was a box of cereal. And it had to be Froot Loops because the pantry was a bundle of lip-smacking scents like tangy lemon, zingy orange, electric lime, and mouth-watering cherry. This meant Ollie had left the bag open and steam would shoot out of Mom’s ears because it’ll have gone stale by morning. I sighed with relief because as far as I knew, no one has ever been seriously injured by sugary, ring-shaped cereal. Then, again, maybe my younger brother would be the first.

I pushed the box aside and moved my hands higher up. I knocked another smaller carton to the floor, where it bounced off my sock-covered foot. I squatted, sweeping my hands across the floorboards until I found it. Bringing the package to my nose, I sniffed its edges. It smelled like Thanksgiving—well, not the last one, but the twelve others before that. It smelled of cinnamon and apples. It smelled of happiness.

I opened the box and felt inside, my fingers searching for more of the memory. They picked up a tiny pouch. A tea bag. It made the sound of Mom’s old flower seed envelopes, the ones she held up each spring and shook like tiny maracas. “April showers bring May flowers! Let’s go plant some future sunshine.”

That didn’t happen this spring. Or the one before it.

I fumbled about until I found an empty spot I could push the tea bags into and then let my fingers wander farther across the shelf. They collided into something crinkly. Bingo!

I pressed my hands around the package. It had the right sound—like crunching plastic—when I squeezed it. I pulled it to my nose. Yes, definitely the right smell. And not one I could attach to any other thing. It was powdery sweet. Buttery. Not quite chocolate but deep, like cocoa. It mixed with scents of sugared vanilla—a cream so luscious, it ran slickly against your tongue. This was not just a food; it was a feeling. I wanted those Oreos so badly my mouth started watering like a mini sprinkler.

I felt around for the opening, the plastic pullback tab that granted you access right to the very heart of the package and the cure-all cookies. Tonight’s remedy. But something was wrong. The pull tab was missing. I groped the front and back, skimming its sides, trying to catch the sticky edge like you do when your Scotch tape has come off the metal ridge and sealed itself back onto the roll. It wasn’t there. I couldn’t find it.

Something brushed against my cheek and I reeled back in fright, bumping into the rickety pantry steps behind me. My fingers slapped at my face, but found only my hair falling out of its messy ponytail. With a racing heartbeat, I ventured a hand along the wall, searching for the light switch. Then I pulled back. I’d better not turn on the pantry bulb, because the glow would creep down the hall and shine like a headlight through Mom’s open bedroom door. She was a super light sleeper. She could leap out of bed at the sound of a cricket passing gas on the back porch.

A flashlight! That’s the answer. I bent down to hunt the lower shelf beneath the microwave. In my mind I could see four of them on the ledge, lined up like eager soldiers: sentries of the dark. But I bumped into one and they tumbled like dominos. I held my breath, trying to absorb the clunking sounds. I made that lungful stay put and listened, wishing I had a third ear. At the relief of no footsteps rushing into the kitchen, I grasped one of the tipsy warriors against the dark, flipped its switch, and looked at the package in my other hand. I held the Oreos all right, but they’d been double packaged, slipped inside a Ziploc bag along with a folded piece of stationery.

I sat down on the old wine crate Mom used as a step, forgetting about how badly it creaked, and unzipped the plastic bag. I pulled out the note and tilted the beam toward the words. It said:
Dear Opal,
Please don’t eat these. Remember your diet.
I love you,
Mom 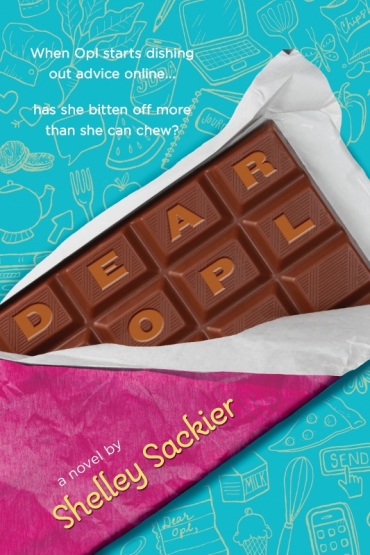 In the two years since her father’s death from cancer, Opal’s life has gone awry.

Grief and her family’s altered dynamics have contributed to Opal’s struggles with food and weight. She is increasingly at odds with her mother, who is overwhelmed and distracted. When her mother encourages Opal to start a blog as a way to document her food intake, Opal decides to use it to express her thoughts instead. Soon, Opal’s sharp, humorous observations as “Opl” garner interest as people respond to her commentary. Sackier captures Opal’s emotional turmoil as she grieves for her father and resists her mother’s campaign to persuade her to diet. When a savage blog entry directed at a popular chef earns Opal criticism from her best friend, remorse—along with an alarming health diagnosis from Opal’s doctor—compels Opal to reconsider the chef’s healthful-food philosophy. Sackier conveys a message about healthy habits without lecturing. Opal’s adventures in cooking and yoga—with occasionally comical results—alter her perspective, and her changing attitudes reflect her personal and emotional transformation. As Opal endeavors to better understand who she is, she gains a greater awareness of others’ life circumstances as well. When a chance encounter leads to Opal’s acquaintance with Rudy, a regular visitor to the local soup kitchen, Opal devises a kindhearted plan to help him.

By the story’s conclusion, readers will be happy they traveled with Opal on her journey to self-acceptance. (Fiction. 10-14)